"Knocking" Issue when turning- what could this be?

If it's really only only 100% when turning, but only one clunk, I'd think about something driveshaft or axle related rather than steering... because if it were steering then it should probably happen continuously as you steer in, steer out - not just once and then nothing.

Also, it should happen, and even more, when at a standstill, which puts more stress on the steering system than when moving; yet you said it never clunks at a stop.

So, I'm thinking it may be about how the torque from the drivetrain splits left/right along the axle. When going straight the split is even 50/50, but as soon as soon as you turn, the split shifts in order to let one wheel turn faster/slower than the other. That's the spider gears' job, and they are the mechanism between the ring and pinion and the axle shafts, inside the axle differential (the pumpkin).

I'd say that there's a some play or slop in there, and that causes the single clunk.

Try this: have someone drive your vehicle slowly while you walk beside it. First straight, then ask them to turn, and listen for that clunk. Try walking to the left side of the car and then to the right, try and hear if it seems to come from one wheel or the other, or if it's from the middle... if it's middle: bingo!

Another cool thing I've seen a UAE Jeeper do is attach his Go Pro under the car, and record not only the video but also the audio. Where his clunk was coming from was real obvious from the video clip. So, if you have a Go Pro and clamp mount, that's another cool way to use it 8)

Gluck with your clunk, and please let us know when you resolve it

Thanks Scavenger & PR and everyone for your advice! Much appreciated- I shared all your thoughts with my mechanic for consideration (the idea of using a gopro to record the issue is a fantastic one PR! I'll certainly try that next time, though hopefully that won't be too soon!

So I'll describe what it was in the end, so that hopefully in the future this post may come in handy for someone experiencing the same problems!

The clicking itself happened usually only once (one 'click', 'clunk' or 'snap', however you want to describe it- NOT as succession of fast clicks, as heard with a bad CV joint) during a sharper turn, and then again upon straightening up.
It could often be felt through the steering wheel and pedals, and sounded to me a bit like the metal against metal sound of opening a car door that doesn't fit properly and has to 'snap' past the car frame to open, if that makes any sense. I use this analogy simply because my car back home has this!

This was getting progressively worse as time went on- it got louder, and happened more frequently and with turns that were not as sharp.
Initially it would happen just with u-turns, and then onto roundabouts, then simply a normal turn at low to mid speeds.

This may have been because most of the sharper turns we take in this country are going to be left-hand ones, however I did try to replicate the sound doing sharp rights and didn't seem to do it until the end, when doing it regardless of direction.

Sometimes, when turning slowly out of a parking space, there was a couple of clicks in a row- the sound being louder in mall parking for example because of the echoed amplification- this might be a good way to test if you have a problem.

In the end, it turned out to be the ball joint on the front right hand side (if this has any connection to the fact that it seemed to mostly happen on left turns, I thought this may as well be included!).

Also- the other problem I was experiencing shortly before I first took it to the garage was that the car seemed to sway or shudder from side to side for a second after releasing the gas pedal after accelerating. I noticed it happening at mid to high speeds, and at the time I thought it might have been a strong wind pushing my car from the side- that's what it felt like. However, I started to realise it was in conjunction with a shift in momentum, and figured it might be a part of the same issue that caused the knocking sound.

However- this turned out to be the bushes (most probably the rear) as after changing these during my first trip to the garage (4 on each side at the rear, 1 each side at the front, I believe) this disappeared.
Looking at the old ones, the amount of damage the rubber had taken was amazing- no wonder the car was off balance! Some of the rear ones were so worn that I could move the metal inside the rubber around really easily- the rubber was really cracked and loose- totally worn!

So I hope this can be of assistance to someone in the future!
Now I can get back out to the desert- woohooo!
Top

Hi Jen - just lots of rugby games (usually all day either Dubai or Abu Dhabi), some only Fridays but now and again tournaments BOTH days

Also had some grief with the awld 97 land cruiser - paid 3500 for a replacement transmission in November and it wasn't right, took them 2 more trips to almost get it to 100%

Then we had some random light problems, headlights all fused - turned out to be a relay blown by silly hi-power blue light bulbs. And a leaking water hose, so the joys of an old vehicle.

Inshallah, may get a few drives in soon.
Top

So I'll describe what it was in the end, so that hopefully in the future this post may come in handy for someone experiencing the same problems

Yes, very good of you to add to the forum's combined knowledge! 8) 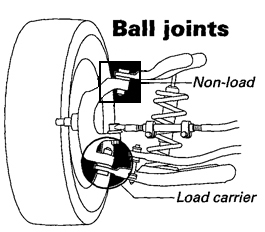 To check for a ball-joint, raise the wheel off the ground safely, then grab top and bottom of the tyre and try move it along the vertical axis (so push with top hand while pulling towards you with lower hand, then opposite).

I think you probably would have heard it click, and hence would have known it needed replacing.
Top
Post Reply
14 posts

Return to “General 4X4 and Off-Road”

Users browsing this forum: No registered users and 2 guests